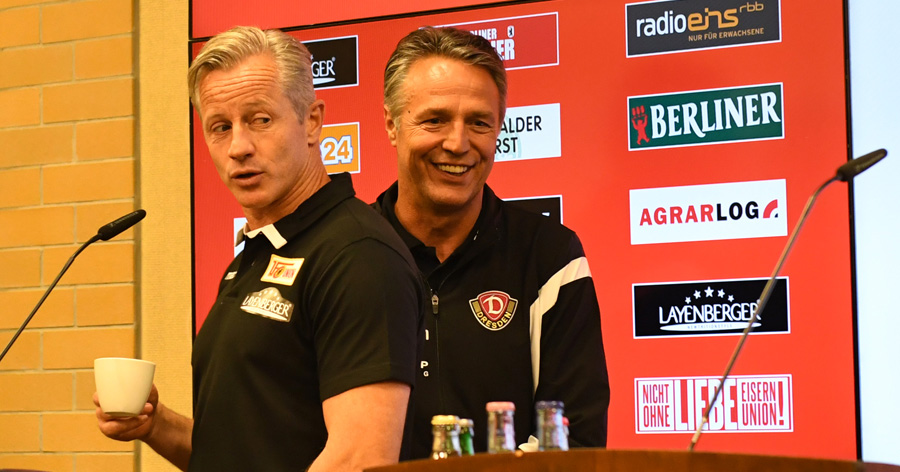 Jens Keller looked sterner and less patient than he does in photographs. And somehow younger, too, at the same time. Like a silver haired Tintin with a sore head. He had already been waiting for a couple of minutes, tapping at the sides of his espresso cup as he tetchily drained away the contents, pacing slightly, tentatively, next to his lectern. He was still fuming about the goals.

The press were crammed into the gleaming room, they choked the aisles and clogged the doorway, scoffing the free sandwiches and gulping down the weak coffee. Photographers cropped shots of the double goal scorer, Collin Quaner, and the man who hit the equaliser, Andreas “Lumpi” Lambertz, for the next days back pages. They didn’t look up at the man who should have been the star of the show. Nobody did, really.

Still, Jens Keller had to wait.

It probably wasn’t that long, but the Union boss seemed annoyed by the pause as well as the despised result, a 2-2 draw that a better focussed team should have won. Here he was at his first post-match press conference at home and all eyes were not on him, but on their screens or on the door that they were sure Uwe Neuhaus was about to march through any second now. His predecessor, The Man Who Built This Place. Neuhaus still knows the back routes of the Alte Försterei as well as anyone. He even helped put the wiring in when they were rebuilding, back when this was his fiefdom, using the skills he picked up during his military service working on the helicopters.

So as everyone focussed on the main entrance Neuhaus slipped in from an unnoticed door stage left whilst sharing a conspiratorial whisper with his head of press, appearing like the ghost of Union past, rattling his chains for old times sake and with a twinkle in his eye for the journalists who he used to spar with.

Exactly five years and four days previously Marvin Kroll ambled happily onto another long ball for Dynamo into a massive hole the size of France behind the Union defence. It was almost the spitting image of “Lumpi”’s equaliser, the second of four goals Dresden would score that day, and it was one of Neuhaus’s darkest periods as a trainer in Berlin. He was raging afterwards, spitting feathers and couldn’t look his players in the eye. They had let him down, he said. He was fucking livid. The post-mortem was carried out in the old media centre in Köpenick, a portakabin with draughty windows and a pile of Marlboro Lights outside the door, stamped out by the boss.

As he nodded hello to Keller and took place ready to begin he allowed himself a wry smile at how different things used to be around here, when he would do all this in that portakabin to a handful of local hacks who knew his answers before he said them, his fingers still smelling of those cigarettes.

Christian Arbeit joked about it, he wondered aloud if he would end up addressing the wrong person because the badge with that famous old “D” was somehow incongruous with the man wearing it. He asked if Neuhaus had gone to the correct changing room, but there was a nervousness to be detected from him somehow, the slightest hint of awkwardness hung in the air. The old boss shrugged and talked about what a good game it had been, how the 22,000 fans must have enjoyed themselves, how both teams went for it. He seemed especially proud of this, knowing full well of his reputation of builder of pragmatic sides fashioned in his own hard-working, no nonsense image.

Neuhaus’s last season in charge had coincided with the first in this new press room. In the olden days as he would speak, he could occasionally allow himself to relax, to enjoy himself and to indulge in the eternal game of cat and mouse that he played with the press, but by the end things had turned sour. He was spikier, much quicker to temper somehow. He was no fun to be around any more. So he was very happy with the roared “Fußballgott” that was his inevitable due, but he hadn’t even thought about it. He said.

It was somehow comforting to see him back at the Alte Försterei. He prowled his technical area, arms folded, lips pouted, annoyed at every perceived mistake from the referee, just like he used to. He sat down when Lumpi scored, content but also well aware that the equaliser, the final goal of three in a second half that was as explosive as the first was error strewn and dull, had come because one of his former charges had utterly failed to do his job as a defender. As “Lumpi” danced onto the ball Fabian Schönheim was away with the fairies, his mind off somewhere else, marking the shadow of a man that had long since left the country.

It wasn’t the way that Keller had imagined his new-look Union to play, but alarm bells had started ringing in the first half. Dresden’s three-pronged attack revelled in the space available, they frolicked in the breeze, they wheeled about, amusing themselves. There was a point when Jakob Busk decided that now was the time for his Edwin van der Sar impression, playing the ball out classily from the back, but in the end it looked less like total football and more like clog dancing. He got away with it. Just.

Keller hated this. He mentioned the positives, Quaner’s predatory instincts that got him the goals, the fight and passion of Kristian Pedersen at left-back, but he moved on quickly. His lip curled with derision when he was even forced to think back to the simplest of errors that his team had made, he wouldn’t mention Christopher Trimmel by name when discussing his disappearing act for the first goal. He just called him “the right back”. He stared straight down when discussing the second. He simply couldn’t believe it. It “angered” him.

I hadn’t been to a press conference there in a long time before yesterday. I was surprised to see everything finish so quickly and that there was no rush to the coaches to get their private views on the game away from the rest of the press. But, apparently, that practice died out when Neuhaus left and they moved into a room with a giant video screen and proper desks. So it was a pleasure to see Keller’s mood. It made sense. It just needed a pile of fag butts outside the door and a chill coming through the windows. It was old fashioned. There was almost something very Neuhausian about it.