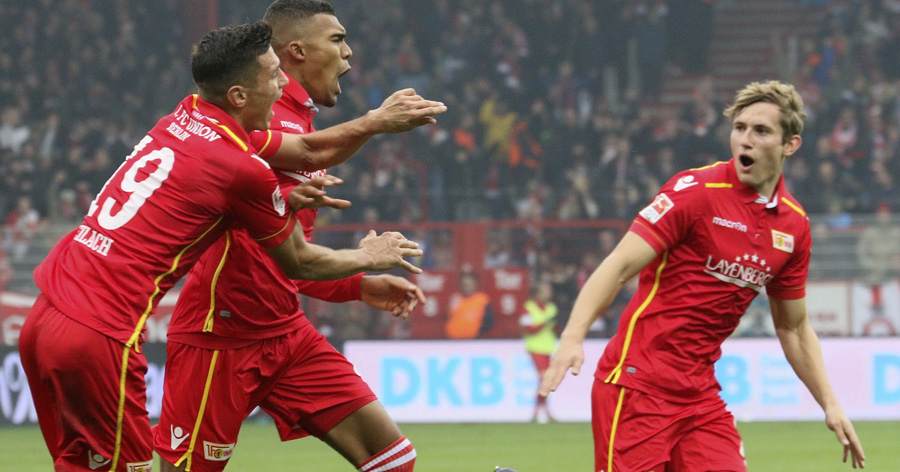 Collin Quaner didn’t saunter out onto the pitch when his time had come He didn’t lope or lollop or swagger or stroll or any of the other terms that were lazily applied to him and his inferred laissez faire attitude during his earliest days at Union. No, he ran onto the pitch, his eyes blazing. He’d been annoyed over the last couple of weeks at missing out, at running the risk of losing his place to one of the many would be usurpers clogging up the striking ranks in Köpenick. For he had hit his stride, he had scored as many goals already this season as he had in the first four years of his career and then his fucking shoulder went.

So on his return, with time running out, he made sure we noticed as he Ran onto the pitch.

His team-mates had already softened Hannover up, they were there for the taking if someone could find the right instrument. Steven Skrzybski hadn’t had his best of days, apart from a great shot from a tight angle that was pushed wide, he had failed to get onto his two best chances to turn and run at a Hannover defence finally on the back foot. But he had worked, shit had he worked hard, all day chasing and harrying back into midfield and deeper. And Fürstner and Kroos and Kreilach and Leistner and Redondo and the rest had all been doing the same, putting out fires, trying to spring counter attacks, all day.

They had it all set up. To paraphrase Pep Guardiola when talking about Johann Cruyff, they had built the cathedral. Collin just had to add a lick of paint to it.

When he arrived at Union there were more than a few dissenting voices. He had scored a handful of goals in a crappy Aalen side that had gone down and he wasn’t fit to lace the boots of Sebastian Polter, they said. In his introductory interview at the club he even talked about Polter in glowing terms, as if in awe of the sheer presence of this man who, if Quaner was too good for the 3rd flight, was certainly too good for the 2nd. He was quiet and humble and he would amble onto the pitch. And when he said he was looking forward to playing alongside Polter you wondered if he even played the same sport as the relentless and arrogant goal machine who should have won the player of the year that season by a country mile.

Collin would then have to watch Bobby Wood come and go with a barrage of goals and a work-rate that matched his upper body strength. Defenders would bounce off Wood the way that water droplets bounce off a slick of oil and Quaner must have once again spent a year thinking what it was he had to do to get a look in. And then off went Bobby to Hamburg with the sound of cash registers ringing in the woods…

Collin wasn’t really expected to even be on the bench for the game against Hannover. It was thought he’d have to sit out another week, maybe talking to SKY, making pleasantries through gritted teeth at half time in a game that he wanted to be a part of. But he made it through and his name on the bench was cheered with a joyousness that Bobby Wood rarely seemed to get, despite the goals. Because the Unioner like nothing more than a fighter (which is why Fabian Schönheim won the player of the year that season when it should have gone to Sebastian Polter).

Collin is no longer shy. He is no longer happy to play second fiddle. Collin wasn’t just warmed up when his name appeared on the board held up by the fourth official with 17 minutes to go. He was sat atop a rocket whose fuse had already been lit.

Within a minute he had made an unchecked run into a huge gap in the box and somehow robbed the ball off the feet of a tumbling Christopher Trimmel who was waging his own personal battle with gravity at the time. He then turned powerfully away from Marvin Bakalorz, played a one-two off the shins of a Trimmel who still didn’t know where the ball even was, shook off the attentions of Stefan Strandberg again and swung his left foot perfectly in an arc, sending the ball flying from a tough angle inside the far post.

Not since the Damned’s “New Rose” – from the snottily twisted homage to the Shangri La’s at the beginning (Is she really going out with him?), through to the catastrophic ephedrine and Strongbow fuelled march bratted out on Rat Scabies’ shitty loose wired snare and bin lid cymbals at the end – had such an impact been made in under three minutes.

Collin had only needed one and half minutes though to do to this game what “New Rose” had done to British music when it was released in 1977. He came out snorting and roaring like a bull, flaring his nostrils, pointing his daggered horns sharply in the direction of a defence full of poor bastards with only a silky trikot and a pair of shin pads as protection.

He charged and reared and left the flaming wreck of what was there before doing it all again only five minutes later, barrelling down the left, barging through defenders like they were made of papier mache. Skrzybski couldn’t quite get on the end of the pass that rolled across the six yard box but Philip Hosiner could.

Collin looked bashful again as the players hopped up and down in front of the Waldseite after the final whistle. They left him space, they pushed him consciously towards the front of their ranks, but he felt awkward there all alone, you could see it. His eyes no longer bulged, he had regained his calm. They were pogo-ing up and down like their lives depended on it, but not Collin. It was as if punk rock and the reinvention of the three minute record had never happened.